Skip to content
HomeSeeds from the sky: bats gift seeds and reduce labour costs for plantation farmers in Kerala, India

Ashoka Trust for Research in Ecology and the Environment, ATREE, in Bangalore, India. Emails: kadambari.deshpande@atree.org, nachiket.kelkar@atree.org

Fruit-eating bats are widely regarded as serious pests of commercially valuable fruit crops, and India’s wildlife protection laws continue to identify them as ‘vermin’ animals (except one endemic fruit bat species) for this reason. Fruit bats are also persecuted for meat and for (unproven) medicinal uses, and populations are declining due to hunting and habitat loss. However, fruit bats act as seed dispersers and pollinators for over 300 commercial fruit trees. It is not yet known how benefits from such services compare with costs that result from damage to ripe fruits caused by bats. As a result perhaps, public attitudes towards bats continue to be negative, and replete with false notions, in India.

But there may be pleasant surprises and exceptions to this common observation. In a recent “Insights” paper published in the journal Biotropica, we reported an interesting story that emerged from interview surveys with local plantation farmers in the Thenmala region in southern Kerala. The purpose of the survey was to review their knowledge and the uses and problems they perceived from bats. The fruit bat species in the area included Indian flying foxes Pteropus giganteus, fulvous fruit bats Rousettus leschenaultii, and the short-nosed fruit bats Cynopterus sphinx and C. brachyotis. Overall, local perceptions about fruit bats were far more positive than negative. About 17% of the respondents did believe that fruit bats caused damage to standing crops of guava, banana etc., but the majority (53%) stated that fruit bats had more to give than take away. People elaborated how bats ate only the pulp and left seeds for human use that turned out especially beneficial for commercially valuable crops of cashew and areca nut, as it made good stock for planting new batches or for sale. Through such narratives people described bat seed-shadows (distance kernels over which dispersal occurred) as their benefit pathways. Bats dispersed seeds either by aggregating them at roosts (clumped dispersal); or by scattering them over large areas (scatter-dispersal) – making them available for use in the wider landscape – a positive spin-off of seed shadows for people without plantations too. 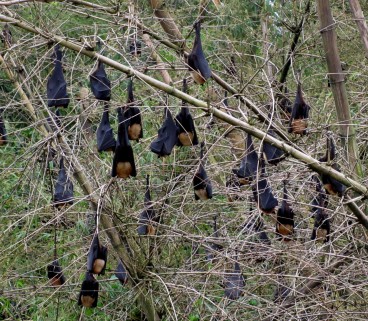 We treated them cautiously at first, but these responses were consistent, compellingly accurate and verifiable across numerous interviews. People also perceived indirect benefits from bat seed shadows. To our major surprise, people claimed that bats helped in reducing labour wage costs of seed collection. Labour scarcity and rising wages indeed represent surmounting costs for Kerala’s planters. Notably, their calculations showed that they saved up a few thousand Rupees per month if they collected seeds at bat roosts (without any real costs) rather than paying over 400 Rupees in daily labour wages. In fact, such collection systems were once deemed so valuable that village self-government bodies had formalized them through leases for planters.

We also discovered that this story was not an isolated occurrence. Field observations from Kenya (S. Musila)and Madagascar (Prof. Paul Racey)are very similar, especially in the case of cashew nut collection by local communities. And if recent reports from northern Kerala are correct, a similar seed collection regime also prevails there. These positive responses of people about the benefits derived from bat seed dispersal are encouraging signs, especially because bat populations and roosting sites are declining rapidly in Kerala, as well as India as a whole. Not only that, they are still rare amidst the dominant notion that fruit bats are just pests. These narratives indeed re-emphasize that fruit bats do not deserve their unfortunate vermin tag, but rather, need protection by recognizing their potentially novel ecosystem service in plantation economies.